Follow Of Course It Makes a Difference on WordPress.com

The other day I looked at a high school social studies textbook that had the U.S. Capitol on the cover. The sight of the Capitol dome made my eyes well with tears. I know that America was not actually founded on the ideals highlighted in the Declaration of Independence, but that is why they’re ideals. But now, as I observe, at the highest levels of government, attacks against the civil liberties of those who are most vulnerable, the sight of a supposed symbol of freedom disappoints me. But the scariest reality is that a lot of people support this push backward in the name of their own “protection” (or what they perceive as protection), even if that idea of “protection” comes at the expense of minority groups and those with the least historical privilege. It seems that these people want a return to the times when those like them felt the most “comfort” in their feelings of superiority.

I know it sounds like a losing battle to wish so much based on representation in a film, but movies aren’t just movies. They tell us who we are, and they inform who we are. And they can seep into our consciousness when we do not notice.

I love that I live in a world in which Moonlight exists. The emergence of Moonlight (2016, dir. Barry Jenkins, Academy Award® winner for Best Motion Picture of the Year [Adele Romanski, Dede Gardner, Jeremy Kleiner]; Best Adapted Screenplay [Barry Jenkins, Tarell Alvin McCraney]; and Best Supporting Actor [Mahershala Ali]) has brought me hope during a discouraging time. That a film so unprecedented exists shows me an example of a place where progress has not stopped, and I hope the film’s success continues to educate, open minds, and support not only full equality but also a change in attitudes between ordinary citizens because we need more than “tolerance.” Just look around. Tolerance doesn’t last. We need evolved open-mindedness. We need education. 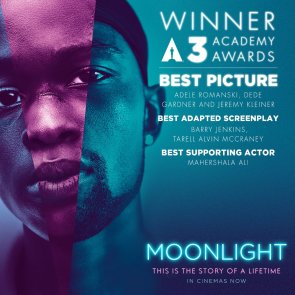 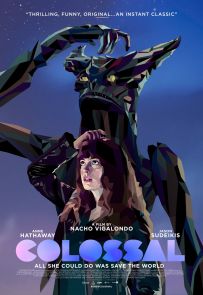 Then with Get Out (2017, writ. and dir. Jordan Peele), I again felt seen and listened to. If you are used to seeing yourself reflected in the media in truthful ways, you cannot understand the feeling, at a time when you need it the most, although that time is well overdue, of seeing two monumental achievements virtually back to back that speak to your experiences and reach both popular and critical acclaim. I feel like I can breathe a bit easier and walk with a bit more assurance. There is absolutely no doubt that these films have started conversations, but those conversations need to explore the right questions and actually reach the right people.

If you are someone who doesn’t automatically understand what I mean when I say that Moonlight and Get Out actually help me breathe with more ease, try to imagine how I felt when I saw Colossal and realized that it is a film that I had been waiting for and a film that we as a culture are starving for. On the surface, it appears to include a story that we see in most films—the tired love triangle involving a woman who thinks she has to choose between two men, one from her past and one from her present. Both men promise her a future of “happiness.” But what actually happens in Colossal is what men (in real life and in movies) take for granted. To enjoy, free of projected guilt, the freedom to choose one of two love interests, to choose one other than the two vying for your attention, not to choose one at all, or simply to make the decision on your own time and not adhere to an ultimatum forced on you is to be, historically, in the male position. And it is certainly a freedom overwhelmingly enjoyed by men in movies. Colossal (2017, writ. and dir. Nacho Vigalondo) gives us a satisfying view of a woman who does not take on the burden of taking care of a man who seeks her to cover up his faults or use her as a punching bag. Even if the men (Jason Sudeikis and Dan Stevens) who want Gloria’s (Anne Hathaway) future were awesome people with no disturbing psychological hangups, that wouldn’t change the fact that we don’t deserve to give away our freedom of choice out of “obligation.” These “obligations” are disproportionately assigned to women to haul around (watch The Hours [2002, writ. David Hare; dir. Stephen Daldry; story by Michael Cunningham; Nicole Kidman, Julianne Moore, Meryl Streep, Stephen Dillane]–have Kidman as Virginia Woolf spell it out for you).

As is true in reality, all three characters need saving. And—as in reality–people like to think that a relationship can “fix” them. A relationship entered into for that reason can’t be a healthy one. As Oprah always says—“Jerry Maguire was just a movie”—don’t look for someone to “complete” you. The choice Gloria makes is not a gimmick or a mere obstacle that will eventually  bring us back to tired clichés we see all the time. It is an overdue call that I hope will help men wake up. Men who think they exist to validate women, or that their opinion matters more than women’s opinions, or that they can use the word “bitch” to “put a woman in her place” are, indeed, asleep. We cannot afford for them to stay asleep.

Despite so much that is wrong, I, someone who treasures the magic and power of movies, feel fortunate that we have these films that, taken together, separately, and in combinations, impart intersectional messages that we need—desperately.

Stuck in the Cheap Seats

Film reviews for the discerning moviegoer

Where All Things Film Converge

Musings and books from a grunty overthinker

Thoughts on public education, politics, and life. Grab a cup. Refills are free.

Marshall and the Movies

Seroword
Of Course It Makes a Difference

Jordan and Eddie (The Movie Guys)

Stuck in the Cheap Seats

Film reviews for the discerning moviegoer

Where All Things Film Converge

Musings and books from a grunty overthinker

Thoughts on public education, politics, and life. Grab a cup. Refills are free.

Marshall and the Movies

Seroword
Of Course It Makes a Difference

Jordan and Eddie (The Movie Guys)